On Tuesday I ran a game of Robotech RPG Tactics at the Edmonton Wargamers Group meeting.
Dave played the Zentraedi forces, while Chen reprised his role from the previous battle as the UEDF.

I had blitz a few bits of terrain teh few days before teh game night.

The Zentraedi forces had 2 recon squads each with a recovery pod.  one squad had 2 heavy missle battlepods attached.
the UEDF forces had a squadron of Valkyries and a a reinforced Brawler Company of (4 Tomahawks and 2 Spartans)

During the first turn, Chen shot up some  battlepods with  valkyrie missiles, but they returned during teh enxt turn.  The Zentreadi fired half the missiles from their heavy missile battle pods, but teh valkyries managed to avoid serious damage. 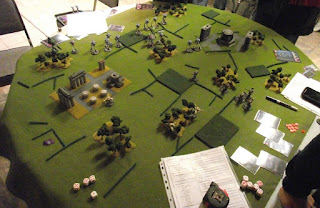 At the beginning of the 3rd Dave moved his 2nd battlepod squadron into position to capitalize on the previous turn's missile strikes. he took out the last UEDF spartan,  one of  the badly damaged tomahawks, and another valkyrie. In return Chen's UEDF forces killed the damaged command pod and more battlepods. 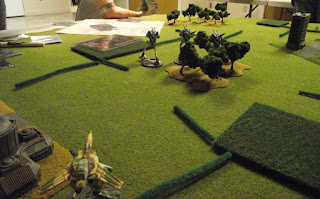 During the 4th turn things tuned for the Zentraedi as  Dave lost his last  Command pod and a recovery pod, and, of course, more battle pods(as long as command pods are alive they comb back after all). 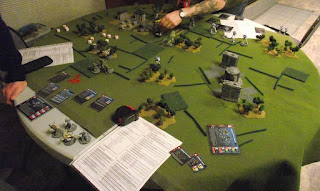 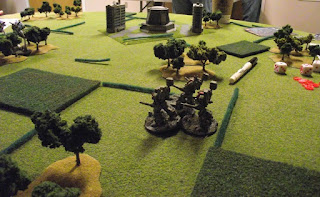 During the last turn,  the Zentraedi charged their remaining recovery pod into close combat with a Valkyrie, but failed to land in hit. 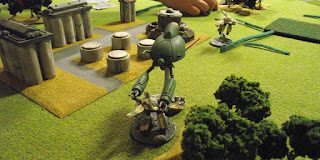 all in all it was a good game. During the 2nd turn it looked like  the Zentraedi were pulling ahead, but the UEDF pulled  ahead during the 3rd and 4th turns.The UEDF still took significant losses.  50% of their unit had been outright destroyed, and another 3 of the remaining 5 machines had heavy damage.

The Zentraedi had 5 battlepods and 1 recovery pod when we called the game.

I think Dave and Chen enjoyed the game.  it certainly was bloody.   I need to get to painting more UEDF forces for some variety.

Posted by Stephen Thomson at 6:43 PM

Stephen Thomson
I am an avid wargamer, modeler and tinkerer in St Albert, Alberta, Canada.