Almost 2 weeks ago I attended Terry Silverthorn's Remembrance day game.  He hosted it on the preceding Saturday, as Remembrance day was on a Wednesday this year.  He has been gearing up to play Osprey's Frostgrave.  so we went at it in an epic 5-way treasure hunt. 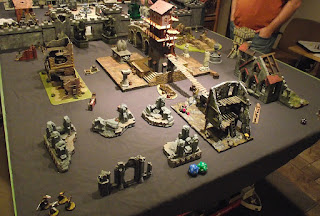 I had chosen thaumaturgy as my primary magic school.  this seemed appropriate as i was using    Sharkey(Saruman) as my mage, and Worm(Grima Wormtongue) as my apprentice. I chose Blinding Light, heal, and Miraculous Cure form the Thaumaturgy list. from aligned magic schools I chose  Mind Control(soothsayer), Push (Sigilist), and Monstrous Form(Illusionist). my last 2 spells were  Elemental Bolt from the Elementalist list and Curse from the witch list.

I rounded out my warband with a Knight(Erkanbrand the bold), and infantrymen(Aragorn) 2 Rohan archers and 2 Dunland Thugs.

I went into this game being a bit skeptical of the rules.  This is Osprey's first shot at a fantasy set.  before FrostGrave, they had been all holistically, and some of the ones I have played have been  easy to break, or just not fun (in my opinion).   these rules really surprised me. they are fairly simple, yet deceptively complex.  and the turn sequence is a nice change of pace.


I spent most of my time keeping everyone out of my portion of the table with push, or hiting targets with blinding light.  I managed to blind Bruce's wizard for 2 turns(with blinding light) and tossed his apprentice off a stone statue(using push) with my apprentice.  I also pushed and blinded Jonathan's apprentice. i decided that my wizard would be henceforth known as Sharkey the Trickster, and his apprentice would be known as Worm the pusher(he successfully cast push almost half a dozen times).


I only saw 2 combat's during the game.  the fist was with Bruce's dog attacking my thug ner some loot.  I piled on with my infantryman and my knight and put it out of it's misery.  bruce retaliated by shooting my knight with a bowman and nearly killed him.  but having the loot, the trio withdrew.

the 2nd combat was late in hte game when Jonathan tried to intercept my loot-laden archer with a carefully place leap cast on one of his henchmen.  to everyone surprise,  my archer won the combat. by that time my wizard and apprentice had arrived in the immediate area, and started taking Jonathan's apprentice for "a ride".

I have to say that i really enjoyed the game.  Even more because i picked a couple of mischievous spells.  i could be heard to be giggling with glee every time some poor unsuspecting enemy was hurled from their hiding spot with my push spell. by the end of the 6-ish turn game I had cast a dozen successful spells, of them 9 where push's.


whe hte dust settled, Bruch, Jonathan and I had made of with 4  loot containers each.  the otehr 3 were split by Terry and Scott.

my warband wasn't involved on the other side of the table, but Terry and Scott  really went at it. terry took Scott;s necromancer out of play early with a lucky shot.  during the course of the game, 2 loot roles brought creatures on the board, and both spawned near Terry.  His wizard was eaten by a zombie, and a stone golem was next on the list it also attacked terry before wandering aimlessly.


here are a few other pics i took. 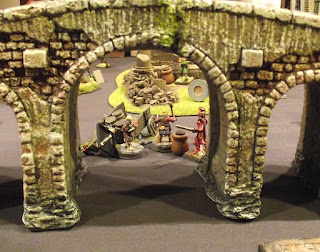 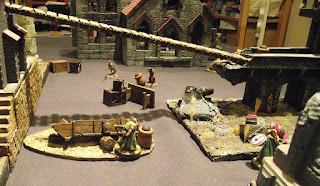 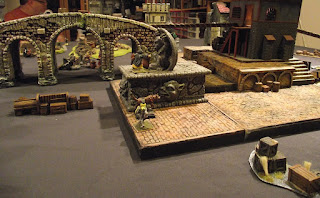 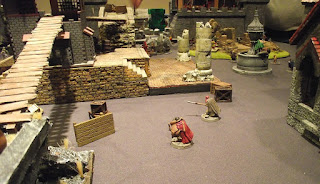 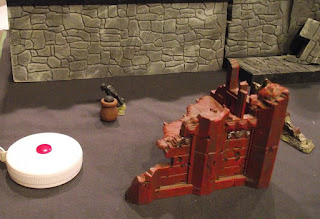 Some time soon I hope to start building some 6mm city terrain for Epic and Robotech.  I also have more robotech models half painted.

Posted by Stephen Thomson at 3:34 AM

Stephen Thomson
I am an avid wargamer, modeler and tinkerer in St Albert, Alberta, Canada.